Domino’s Pizza: The Dough Is Rising

Domino’s Pizza is the largest pizza company in the world with over $14.3 billion in global retail sales. Starting with a single store in Ypsilanti, Michigan in 1960, Domino’s has grown its presence to over 17,000 locations in more than 90 markets today. The linchpin to this success has been its pioneering concept of delivering made-to-order pizzas to customers’ doorsteps as efficiently and timely as possible.

This key to success, however, has come under threat due to the emergence of third party delivery aggregators such as Grubhub, DoorDash, and Uber Eats that are presenting consumers with the ability to get food delivered from just about any restaurant. A concept that was once unique and provided a competitive edge to Domino’s has now been commoditized sparking investor concerns and depressing share price.

While some may view Domino’s lackluster share performance as a troubling sign, we view it as an opportunity to gear up for an entry point as we believe Domino’s business economics, brand equity, and track record of execution is still one of the best in the industry.

We are of the view that the competitive pressure posed by food delivery aggregators is transient. While it is true that the aggregators have redirected consumer dollars as evidenced by the declining SSSG (Exhibit 2), we believe that this redirection is fueled largely by aggressive dealing and promotions that are not sustainable in the long term. Promotional campaigns and discounts intended to acquire customers have been subsidized by significant capital raises at rapidly growing valuations that will eventually curtail as investors shift their focus from customer acquisition to earnings. We are beginning to see this happen already through the declining amount of capital invested in the Food Delivery sector (Exhibit 3). Consequently, we believe that transactions that were pulled away from Domino’s will eventually return.

Exhibit 2: Domino’s US SSSG Vs. Peers 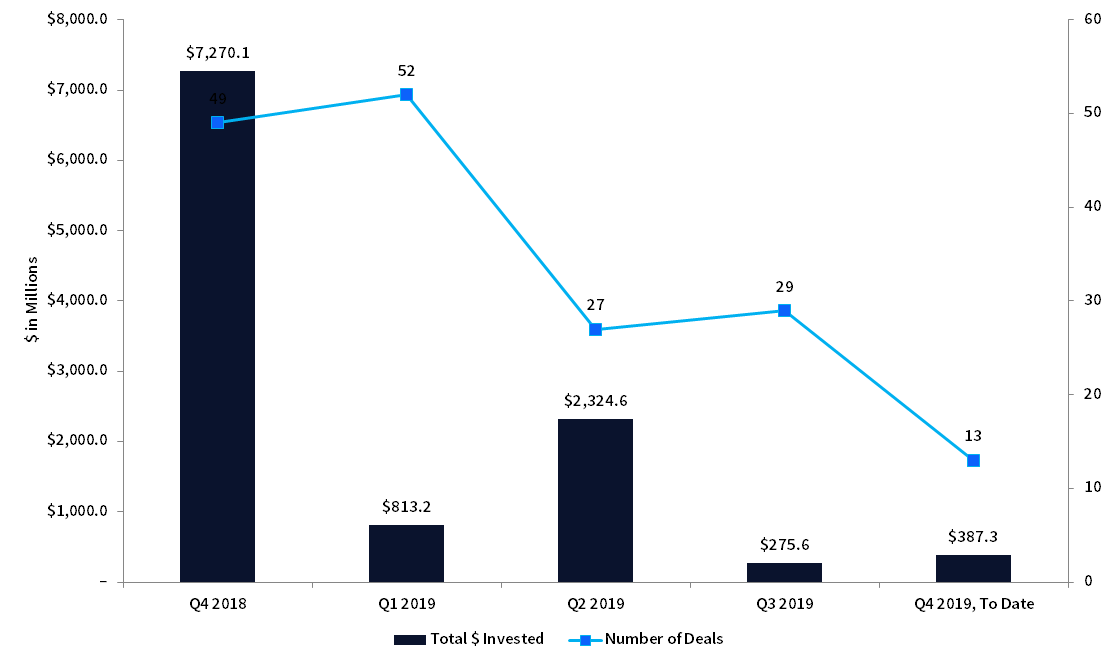 Furthermore, we are not convinced that the economics of food delivery will improve significantly in the near term and that both restaurants and consumers will likely see higher delivery and commission costs going forward. Despite charging $6-$8 per delivery, players like Grubhub are still unable to demonstrate compelling unit economics as they scale as noted by Exhibit 4. This notion is further highlighted in Grubhub’s October 2019 letter to shareholders, where the company states that it does not believe it “can generate significant profits on just the logistics component of the business” as ” it [the logistics component] is a commodity and there are significant variable costs that are hard to leverage even with technology and scale” (Exhibit 5). This commentary and our unit economics analysis in Exhibit 6 makes us question whether the $6-$8 price point is sustainable long-term or are consumers and restaurants going to see a further increase in price. As is, restaurants have ubiquitously complained that their delivery orders are effectively zero-margin after netting out commissions paid to the aggregators.

When the discounts and promotional campaigns begin to taper and true delivery costs are charged to consumers and restaurants, we belive Domino’s relative value and low-cost delivery model (~$2.99 per order) will make it an easy pick among the available choices. 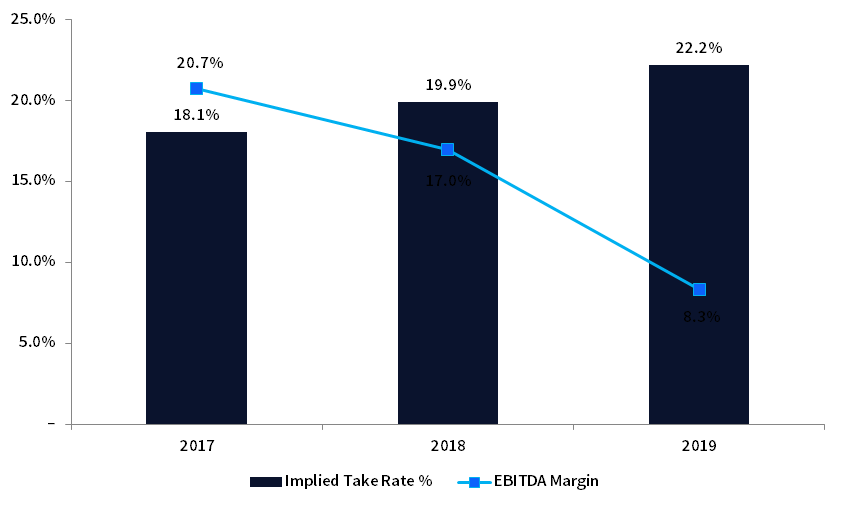 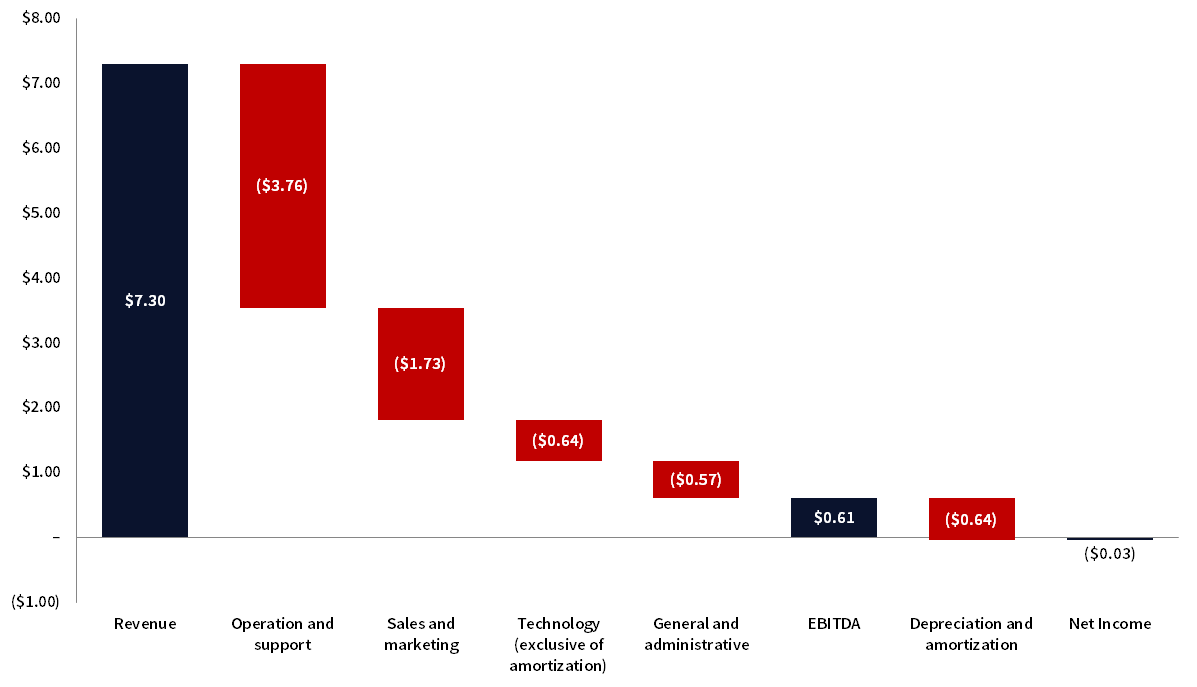 At a time when Pizza Hut’s largest franchisee is exploring bankruptcy and Papa John’s is strategizing its turnaround, Domino’s appears to be in best the position to not only face the changing dynamics of the industry but also capitalize on the weaknesses of its competitors. In fact, Domino’s appears to have been doing this all along. The first wave of food delivery came about in 2014 when Uber Eats and Deliveroo launched their logistics platform. During this time, we began to see unit growth of QSR pizza names begin to decline almost immediately. Between 2014 to 2018, the unit growth of top 500 limited-service pizza chains have declined from 1.9% in 2015 to 0.3% in 2018. In contrast, Domino’s has managed to increase its unit growth from 2.6% to 5.2% over the same period (Exhibit 7). This resulted in an impressive gain in market share of 6.66% for Domino’s while Papa John’s and Pizza Hut’s declined by 1.8% and 4.65%, respectively (Exhibit 8). What is more impressive is Domino’s has also been able to grow its franchisee store EBITDA by more than 58% from $89K to $141K over the same period (Exhibit 9). Currently, Domino’s EBITDA per franchise store stands at an estimated $139K – $141K vs Papa John’s $40K and Pizza Hut’s $50K. This is a feat unmatched by others and speaks to the strength of Domino’s brand, the focus on franchisee’s economics, and the effectiveness of management execution. 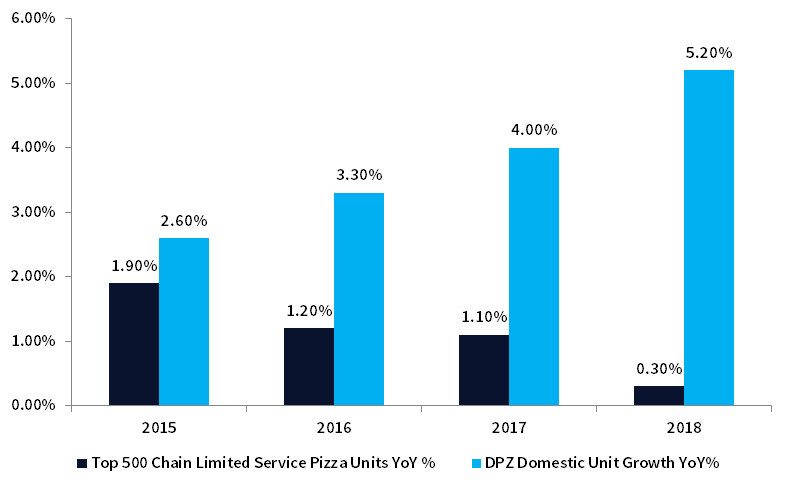 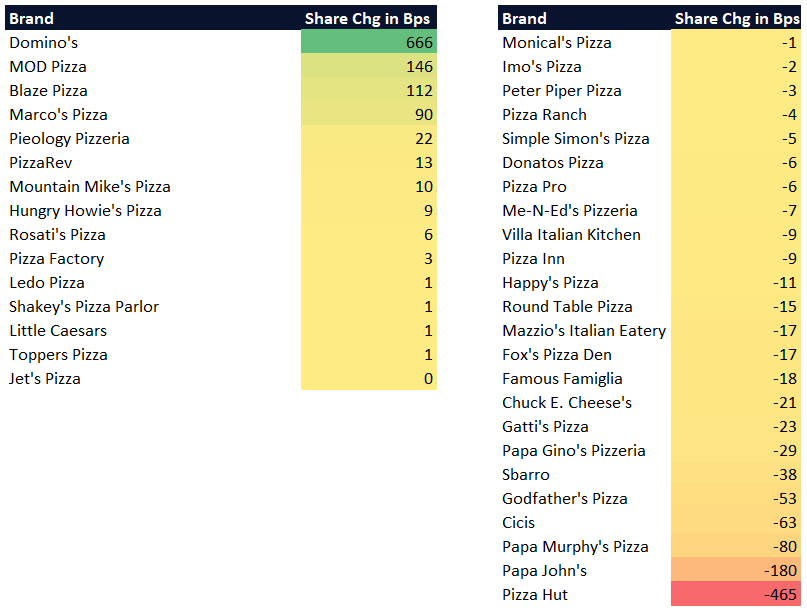 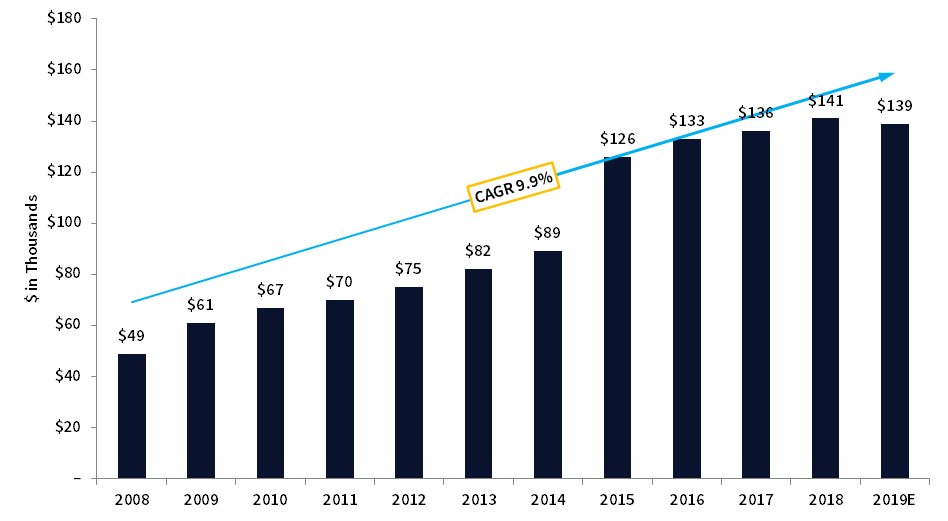 Recent developments about Pizza Hut’s largest franchisee also points to the strength of Domino’s unit economics. NPC International, which operates 1,200 Pizza Hut locations in the US (16% of total Pizza Hut’s US locations), is exploring bankruptcy due to mounting food and labor costs. In addition, Pizza Hut itself is closing approximately 500 underperforming locations over the next 24 months as the company shifts its focus from dine-in to delivery and carryout. In 2018, Pizza Hut and Papa John’s had 288 and 186 store closures, respectively. In contrast, fewer than 100 Domino’s stores globally were closed in the past 5 years.

It would appear that when the industry is facing competitive headwinds, Domino’s has not only been able to withstand the pressure, but also emerge from it stronger by steadfastly focusing on what truly matters: product, customer, brand, and technology. All of this has put Domino’s in at the forefront of the industry and we believe the current environment will prove to be an opportunity for the company to once again outshine its competitors.

While the market appears to be on the fence about Domino’s ‘fortressing’ strategy, we believe it is an appropriate response to the changing dynamics of the industry. Domino’s ‘fortressing’ strategy refers to the concept of adding new stores to areas that are outside of a mile of a Domino’s location. The idea behind is that by adding stores to an existing territory, the company would be able to shrink delivery areas, shorten delivery times, encourage in-store pickups, and improve overall service. While this move has the potential to cannibalize existing stores in the short term, we believe the long-term benefits associated with having a more competitive market position far outweigh the potentially weak quarterly SSSG figures. Plus, we believe it is a strategy that will “kill multiple birds with one stone” for the reasons below.

First, by putting ovens closer to the consumers, Domino’s quick and consistent delivery times are likely to stand out among the competition. Currently, the top consumer complaints regarding food delivery are “receiving food that is not warm or fresh” and “food being delivered late” (Exhibit 10). Given dwindling consumer’s patience and lifestyle changes (increasing preference for ‘ordering in’ over ‘eating out’), fast delivery at low rates has become an expectation and Domino’s is in the best position to fulfill it. Currently, Domino’s average delivery time globally is 22 minutes, which is already well ahead of other third-party deliverers that range from 40 minutes to more than an hour. With the fortressing strategy, we are also not only likely to see shorter delivery time, but also increases in purchasing frequency and greater average ticket as the friction associated with ‘ordering in’ decreases. 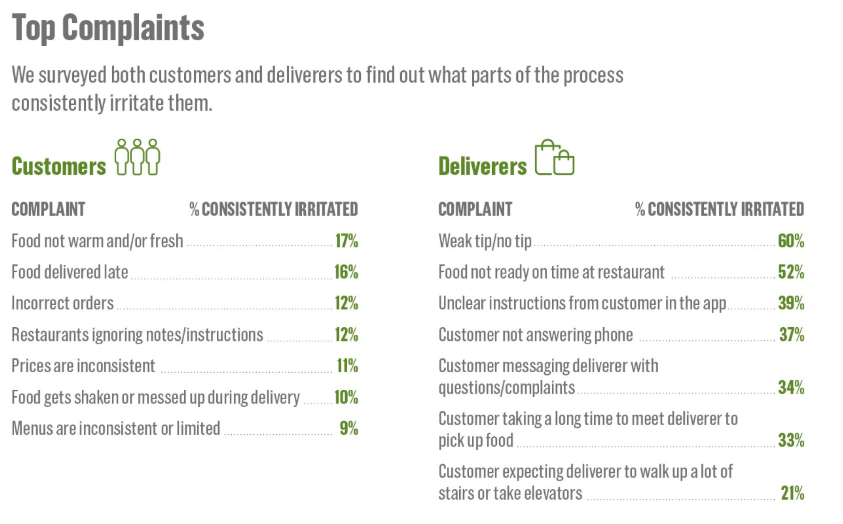 This would in turn reduces the cost per delivery and further improves the store-level unit economics. We saw this happened in Seattle, the first test market for the fortressing strategy. In 2010, the average Seattle store was doing a little over $14,000 in  sales per week. Fast forward to 2017, this number grew to $26,000. The franchisee that was interviewed reported more fluid deliveries with the average delivery per hour increasing from 2.5 to 5, as well as a decrease in marketing spend. The overall impact of fortressing led to a >2x jump in profit per store from $67,000 to $158,000. Being able to increase the delivery per hour can also be thought of as a natural hedge against rising labor cost and is also an advantage from an operations and scheduling standpoint.

Last, adding more store concentration to neighborhoods is likely to deter competition from entering the market. We have seen this to scenarios play out in India, where Papa John’s exited the country in July 2017 and Sbarro, another major US-based pizza chain closed stores in Delhi-NCR. Similarly, we have seen other multinational pizza brands such as Australia’s Eagle Boys Pizza and South Africa’s Debonairs scaling down operations in India. Eagle Boys has attempted to capture market share by upping store count from 18 to 350 over two years but is now left with a single store in Pune. Debonairs has similarly attemtped to enter the market twice but both attempts have been unsuccessful. In contrast, Domino’s master franchisee in India, Jubilant Foodworks, has experienced an 11% revenue growth and 6.5% SSSG in its Domino’s outlets during that time. We can see that when it comes to franchising, having a dominant presence over a territory is a highly effective strategy as new players are going to not only have a difficult time finding attrative locations but also generating visibility to establish their brand.

We are assigning a DCF-supported price target of $400 on Domino’s. As of February 18, 2020 share price of $295, this represents a potential upside of 35%. Our valuation implies a 2021E EV/EBITDA of 24.5x. While this is a slight premium to peers, we believe it is justified given Domino’s quality business model, track record of execution, and best-in-class unit economics. We believe the current investor sentiment is overly myopic and expect the near-term catalyst to be the recovery in SSSG as pressures from aggregators level off and the results of fortressing becomes more visible.

In our view, Domino’s is playing the game it has always been playing: relentlessly focusing on improving franchisee unit economics, growing market share, reinforcing the brand, and delivering on the value proposition that continues to set industry standards. While the stock may experience some turbulence in the short-term, we believe investors who are willing to look farther beyond the quarterly results will be well-rewarded for their patience.

Disclaimer: This article does not constitute an offer to sell, a solicitation of an offer to buy, or a recommendation of any security or any other product or service by Alphabridge. Nothing in this article is intended to provide tax, legal, or investment advice and nothing in this website should be construed as a recommendation to buy, sell, or hold any investment or security or to engage in any investment strategy or transaction. You are solely responsible for determining whether any investment, investment strategy, security or related transaction is appropriate for you based on your personal investment objectives, financial circumstances and risk tolerance. You should consult your business advisor, attorney, or tax and accounting advisor regarding your specific business, legal or tax situation.

In markets around the world, we
work relentlessly to support forward-thinking organizations with intellectually rigorous analyses and insights, so they can make mission-critical decisions and drive their business forward with confidence. 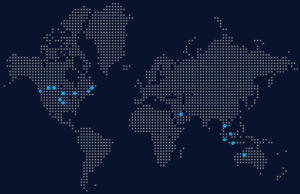